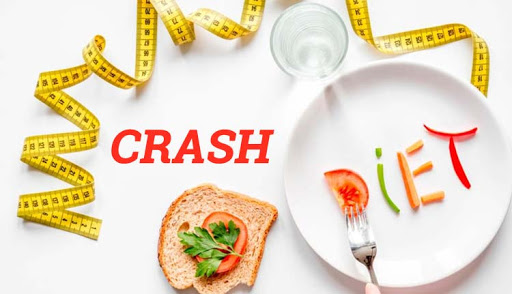 Introduction To Crash Dieting – What Are Crash Diets?

Fat is regarded as an anomaly these days. The media has successfully inculcated into society the idea of losing all of our body fat ‘so that we become more fit and attractive.’

The weight loss industry runs into several billions annually because of people’s desire to lose weight by any means possible.

By any means possible? That is absolutely right, and you best believe there are several hundreds of ways you can eliminate unwanted fat – whether via dieting, using supplements and diet pills, yoga, exercises, work-out, drugs, surgery, and so much more.

Dieting is another huge umbrella sheltering a variety of dietary plans geared towards chopping down on the body’s calories which leads to eventual weight loss.

These diets are known as crash diets and have become popular because of the skepticism around the idea. While some people are pro-crash dieting, some are of the idea that it may not be effective for long term results.

According to findings, crash dieting no doubt helps you reduce calorie intake which leads to weight loss. But to enjoy the long-term results, you may have to keep having your diets low on calories.

Just in case you didn’t get the memo with my ‘on and on’ explanation above;

Crash dieting is a prepared plan to chop down the amount of food consumed to the barest minimum, thereby reducing weight in the shortest possible time.

What Are The Reasons Behind The Idea that Crash Dieting is Seldom Effective?

As said earlier, some think of crash dieting as the alpha and omega for weight loss, however, some factions think it is trash.

More often than not, these calorie-restriction diets instead of reducing your weight, end up torching more bucks from your wallet – and the following are some of the reasons why crash dieting is considered trashy and ineffective by some elite factions;

Do you know that there are bad as well as good fats? Your body needs some fats to heat up and protect some vital organs – the good fats. However, with crash dieting, both the bad and good fats would be lost and this can cause health problems.

If you really want to control body fats, you don’t necessarily need to eat less of it, you just need to eat the right ones.

Crash dieting, once discarded, can lead to overeating which means you end up heavier than when you began the weight loss journey.

This happens because after a fast comes a feast! This natural system makes crash dieting ineffective and unreliable.

Change is usually frowned at by the body especially if it has been accustomed to a particular eating pattern. Whether the change is for better or worse, the body doesn’t adjust immediately. And that is why it is difficult to stick to a particular diet.

Look at this mental illustration for example – your body is used to lugging fats around and to do so continuously, it develops a system to that effect.

More nerves, more blood pumped by the heart, wider hips to accommodate the extra pounds. However, when you start crash dieting, you cause a serious shift in what the body is used to, and in the initial stages, there will be serious discomfort.

Although with time, the body will adjust, the initial discomfort is something to be worried about and makes it so difficult for anyone to stick with crash dieting.

There seems to be a relationship between carbs, insulin, and body fat storage. However, crash diets don’t seem to respect this relationship because it causes a drop in blood sugar levels.

This drop leads to the craving for carbs which excites the body insulin and causes it to store more fats.

Weight But Not Fat Loss

As far as we know, crash dieting can drastically reduce your numbers on the weight scale. However, when it comes down to losing actual fats, crash diets don’t do so much.

This is because crash dieting only makes you lose muscle or water weight (which is easily regained), both of which can be harmful to your health.

Beginning a crash diet in the first two weeks will leave most people miserable because, at that stage, water and protein are lost. When this happens, a false weight loss is evident with the body intuitively holding onto fats as its final resolve.

When you suddenly reduce your calorie intake through crash diets, your body makes a panic metabolic adjustment as it fears it might be starving.

This adjustment means the body finds a way to switch from its normal fat-burning mode to a fat-storing tank. You can say the body literally has a mind of its own and finds a way to protect itself once it notices a sudden calorie restriction.

It means that the production of LPL (lipoprotein lipase), a powerful enzyme that converts and stores blood fats as body fats, would spike up. This can be seen as your body taking measures against you for an abrupt denial of the wanted calorie.

Whatever calorie that enters your blood is transported to your body and stored as fat. So, when you eventually discard the crash diet, your body metabolism would have been used to running low, and hence you tend to gain more weight and even faster than you got rid of it.

That makes crash dieting quite ineffective if you want to lose weight in the long term.

Crash diets can be useful if you want to lose weight quickly for an upcoming event that is say two weeks away.

It is effective for making you lose false weight, and best advised not to be practiced for long because it poses harm to your well-being. Crash diets also make you weak due to protein, water, and calorie deficiency.

For some, crash diets do the trick. However, taking a deeper dive into the phenomenon, you would understand why it is not seldom effective – especially in the long run.

The key to proper and healthy weight loss is to gradually and steadily reduce your calorie intake – so your body doesn’t jolt into a panic and defensive mode – which causes more harm than good.

A 2018 study indicate that doctors recommend crash dieting to overweight people, so it’s not all bad.